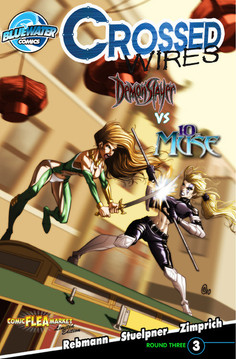 After the massive battle with Bomb Queen, Mercury has once again teleported the Muse and Badger to another world. In this 3rd installment, the trio find themselves encased in a Mayan pyramid, where they cross paths with Marat Mychaels’ “DemonSlayer.” Jaclyn, the newly appointed slayer, is still being trained by the monk Tenzin. In this massive tomb, they track the trickster demon called Golic, who wants to escape to the mortal world. Everything was going to plan, until Mercury, Muse and Badger fall out of a teleportation disc.

Now Golic has possessed the DemonSlayer to fight Muse and her allies. It’s a battle royal as the power of the Greek gods collides with the mystical DemonSlayer. Featuring Mike Baron’s “The Badger.” With a special cover by Marat Mychaels!