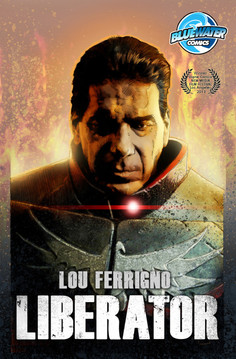 Double the action in this special edition of the "Lou Ferrigno: Liberator".  Featuring both issues of the awards winning mini series.    Ed Migliocetti (Lou Ferrigno) has served his country. When the endless war began, he put aside his football career to sign up for the military. And when the powers-that-be drafted him into the Enhanced Abilities Initiative, he became known as The Liberator. Teamed with a group of “supers” – Sidewinder, Gaia and Volt – Liberator represented the best of America. Or so he thought. He soon found himself doing the government’s dirty work – assassinations, regime change, infrastructure sabotage. Through it all, Ed followed orders. He was a good soldier. Featuring Lou Ferrigno (The Incredible Hulk,) Michael Dorn (Worf from Star Trek,) Peta Wilson (La Femme Nikita) and Ed Asner (Up.)