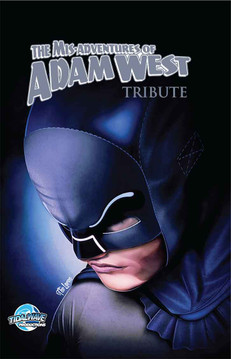 A special tribute edition of the cult classic comic book series created by the iconic Adam West. Fans of the Batman '66 program will love this series.  The Man, The Myth, The Amulet? Legendary star of the small and silver screen, ADAM WEST has had his career youth-enized in this hip, whimsical, trans-dimensional epic of an adventure.  When a mysterious fan delivers an exotic amulet to Mr. West’s doorstep, he is Dorothy-fied on an odyssey that will change his career, his love life, and inadvertently make him the man that saves the universe! All 16 issues are included as well as a bunch of never before seen images from the West series.  Also included is the never before seen defunct "Boy Wonder" spin-off.  Included as well is a look into the another spin-off off series featuring the women who played Catwoman, Julie Newmar and Eartha Kitt. Over 475 pages of camp fun with a special cover by Hal Laren.