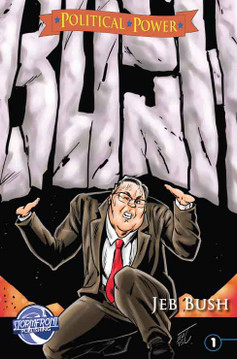 Legacy. For the Bush family, legacy is a powerful word, hinting of destiny made manifest and the promises of generations kept. Prescott Bush, a Senator from Connecticut, felt its power, as did his son, George Herbert Walker Bush, who went on to be the 41st President of the United States, and his son, George W. Bush, who became the nation's 43rd President. But will the weight of legacy be too much for W.'s brother, John Ellis "Jeb" Bush? Can Jeb forge his own legacy? By the acclaimed writer and artist team of "Political Power: Rand Paul," Michael Frizell and Joe Paradise!