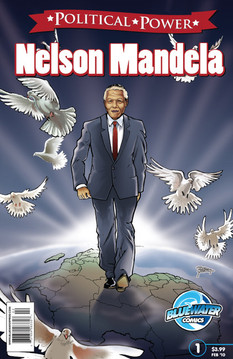 Nelson Mandela of South Africa is one of the most important figures of the last century. He is a symbol of the struggle against racial and political oppression, and a model for sustaining that struggle with grace and decency. Born into an elite family of the Thembu people, Mandela could have had an elevated place under European control, but he chose a different route. He became a successful lawyer, political activist, national leader, fugitive guerrilla, and finally a prisoner of South Africa's brutal white supremacist apartheid regime. After 25 years in prison, Mandela walked free to become the first black president in South Africa's first multi-racial election. Refusing to equate victory with revenge, he called on both supporters and former oppressors to work to heal his fragile country. Mandela realized his place in African democracy, so he set an example by relinquishing power after his term in office. He has since gone on to become a beloved international figure, like a 90-year old rock star, an icon dedicated to sacrifice for those in need.