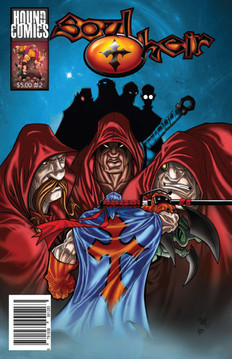 In Issue 2 the remaining Syndicate Generals have gathered to bury their comrade General Skar. As they wonder how this could have happened and who is responsible, speculations of a Royal Marshall arise in their conversation as General Kutty reveals his plan of revenge that will unfold while the citizens of Imperial City gather to celebrate the cosmic event known as the Blue Moon.   General Kutty has hired members of the notorious Bazawagee Clan to bring a sudden and destructive end to the days festivities.

Explosions and mass mayhem ensue as the Bazawagee Clan members descend on the city with murderous intent.  Much to their regret their reckless actions catch the attention of our hero Captain Haki and after a brief interrogation of the thugs, he learns that a Syndicate General is scheduled to meet with them later that day in a sector of abandoned warehouses. A storm is brewing on the horizon as well as an inevitable confrontation between Captain Haki and General Kutty.