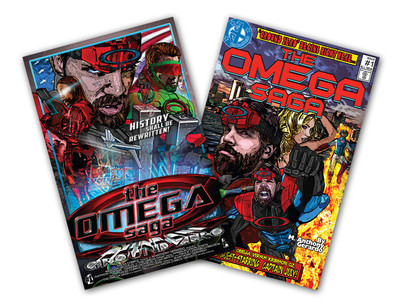 When Fireman Leo LeRonin was pulled out of  the wreckage at ground zero- he knew there  was more to that fateful day than we were  all told. Unfortunately his public conspiracy  theories would lead to his mysterious death.  Now, Leo's son Paulie (a technical genius)  wages a personal war against those he  believes are responsible for his fathers death as the urban legend called OMICRON!  Aided by the enigmatic Mascion Geodeus  (a warrior from another time) the two  men form a partnership dedicated  to exposing a global illuminati. But when Paulie's sister Saffron  is forced to be an unwitting pawn to draw out these “Omeganauts” the stakes become much higher!