The World of Aluna #1 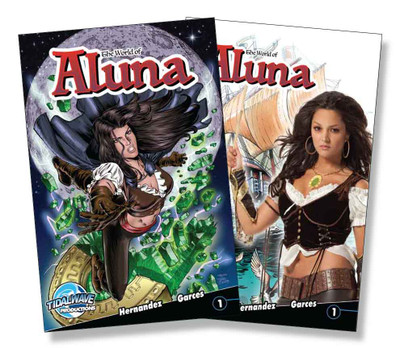 The World of Aluna #1

ALUNA is a new 'superhero' comic book series that takes place in the 1500's during the Spanish Conquest. A young woman who grew up in Spain escapes to the New World to stop a wicked Spanish prince from waging a brutal slaughter of native people. Once there, she discovers it is her true homeland, and realizes that she possesses extraordinary powers as the chosen warrior of her tribe.  A conquistador, Francisco Cortes, interrupts a ritual in the jungles of South America and encounters the powerful Goddess – Pachamama. Back in Spain years later, his young daughter, Aluna, would rather spend her time fencing with her friend Antonio than take dancing lessons. When Francisco gives Aluna a strange green gemstone, she discovers that she has supernatural strength. But is this a blessing or a curse? Created by film & television actress Paula Garces and Antonio Hernandez.