War of the Elementals 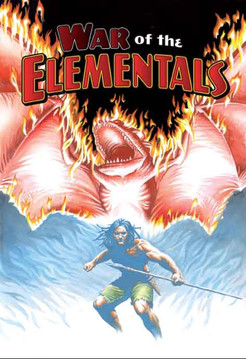 War of the Elementals

Check out this back to the past adventure in this special edition. 1915 France. The Great War rages and a new breed of hero takes to the skies. Part bull-terrier, part daredevil, the aces of the Royal Flying Corps’ 5th Squadron are Britain’s elite. It was an era of counter-intelligence, dogfights, and drinking songs, but that was before the world changed. That was before the Elementals. When a routine mission goes awry, the 5th Squadron finds itself trapped in an unreal world called The Source. Here, giant bat-like creatures dominate the world, keeping the Universe, and all of its parallel realities, in a precarious balance. But despite its serene appearance, it is a violent, predatory land. Trapped along with Germany’s greatest flying ace, they all must work together to find a way back home, but the home they left is no longer the world they knew.  Never before seen images!